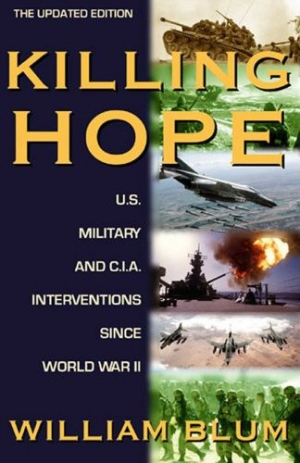 Is the United States a force for democracy? In this classic and unique volume that answers this question, William Blum serves up a forensic overview of U.S. foreign policy spanning sixty years. For those who want the details on our most famous actions (Chile, Cuba, Vietnam, to name a few), and for those who want to learn about our lesser-known efforts (France, China, Bolivia, Brazil, for example), this book provides a window on what our foreign policy goals really are.

It’s not a pretty picture. It’s enough to give imperialism a bad name.

Read the full details in: Killing Hope: US Military and CIA Interventions Since World War II.

“Far and away the best book on the topic.” – Noam Chomsky

“I enjoyed it immensely.” – Gore Vidal

“I bought several more copies to circulate to friends with the hope of shedding new light and understanding on their political outlooks.” – Oliver Stone

“Each chapter I read made me more and more angry.” – Dr. Helen Caldicott, international leader of the anti-nuclear and environmental movements

See a map based on the interventions chronicled in this book.

To purchase Killing Hope by credit card, take note of the price and use the PayPal button below.

Killing Hope in other languages