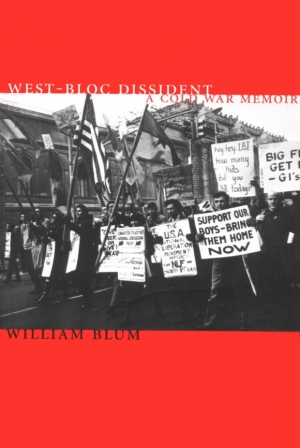 So who’s William Blum and why should you read his memoir? Does he care about YOUR life? Well, he might if you wrote about it and made it as funny and as thought provoking (so he says) as he has about his life. He explores how he became, and what it felt like to be, a radical dissident, the proverbial outsider, in America in the 1960s, the 70s, and up to the present day, probing the aesthetics of a revolutionary who looks for beauty in the social arrangement as others look for it in art.

As someone who spent four years with IBM and more than two years with the Department of State, and then – when the speeding locomotive of the Vietnam War and the Sixties roared headlong into his life and beliefs – immersed himself in the anti-war and other leftist and counter-cultural movements, Blum was particularly well situated to perceive people, events, and ideology in both the “bourgeois” and “alternative” societies and arrive at non-knee-reflex judgements.

Though serious in subject and purpose, the book nonetheless displays the author’s vintage New York City sense of humor, with all the wit, satire and sarcasm the world associates with the Big Apple. No one is spared, least of all Blum’s “comrades” in “the movement”.

An important thread running through the book is the acute, non-negotiable tension existing between individuals like Blum and the National Security State that America has been for more than half a century now. The author takes on the CIA, FBI, State Department, the police, et al. He is, in turn, bedeviled by informers set upon him by the government.

We read of how the authorities labored to wreck the “underground” press, with which Blum was intimately associated; also how the author wound up living with the leading bomber of the 1970s and his girlfriend who played a key role in the Patty Hearst kidnapping saga, a set of circumstances which gave rise to much irony and absurdity.

A chapter on Blum’s stay in Chile under Salvador Allende before his CIA-organized overthrow (of Allende, not Blum) is a particularly important slice of history.

There is also Blum’s experience in Los Angeles, working with Oliver Stone to make a documentary film based on one of Blum’s books on U.S. foreign policy. The film was stillborn, but the tale is replete with the well-known charms and idealism of Hollywood that America has come to know and love.

Not least, West-Bloc Dissident is a desperately needed relief and antidote to the noxious fumes of nationalism that are choking American society today.

Here’s how the book begins:

The fourth day of August, 1969, 7:30 of a warm, clear Monday morning, Route 123, Langley, Virginia. Before the week is out, the sociopathic followers of Charles Manson will carry out their gruesome murders. Strangely enough, though what I’m about to do is completely non-violent, many Americans would regard it with equal abhorrence.

To purchase West-Bloc Dissident by credit card, take note of the price and use the PayPal button below.

Or purchase it online elsewhere: Amazon.