William Blum left the State Department in 1967, abandoning his aspiration of becoming a Foreign Service Officer, because of his opposition to what the United States was doing in Vietnam.

He then became one of the founders and editors of the Washington Free Press, the first “alternative” newspaper in the capital. 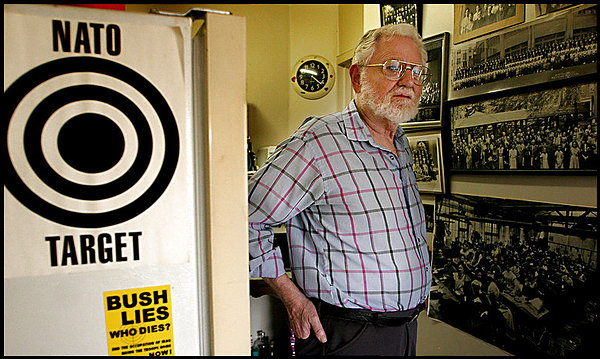 Mr. Blum had been a freelance journalist in the United States, Europe and South America.  His stay in Chile in 1972-3, writing about the Allende government’s “socialist experiment” and its tragic overthrow in a CIA-designed coup, instilled in him a personal involvement and an even more heightened interest in what his government was doing in various parts of the world.

In the mid-1970’s, he worked in London with former CIA officer Philip Agee and his associates on their project of exposing CIA personnel and their misdeeds.

His book on U.S. foreign policy, Killing Hope: U.S. Military and CIA Interventions Since World War II, first published in 1995 and updated since, has received international acclaim.  Noam Chomsky called it “far and away the best book on the topic.”

In 1999, he was one of the recipients of Project Censored’s awards for “exemplary journalism” for writing one of the top ten censored stories of 1998, an article on how, in the 1980s, the United States gave Iraq the material to develop a chemical and biological warfare capability.

Blum was also the author of America’s Deadliest Export: Democracy – The Truth About U.S. Foreign Policy and Everything Else (2013), Rogue State: A Guide to the World’s Only Superpower (updated edition 2005), West-Bloc Dissident: A Cold War Memoir (2002), and Freeing the World to Death: Essays on the American Empire (2004).  His books have been translated into more than 15 languages.

During 2002-2003, Blum was a regular columnist for the magazine The Ecologist, which is published in London and distributed globally.

In January 2006, a tape from Osama bin Laden stated that “it would be useful” for Americans to read Rogue State, apparently to gain a better understanding of their enemy.